If you live by a great cup of coffee, as I do, you’ll love my personal blends, grown naturally and harvested from small estates around the world. Take a moment… sip, savour, enjoy!
— Wolfgang Puck

Silently, one by one, in the infinite meadows of heaven,
Blossomed the lovely stars,
the forget-me-nots of the angels.
— Henry Wadsworth Longfellow (from Evangeline: A Tale of Acadie)

This DECAF coffee is bright, sweet, and lively at a time of day when most things aren’t. It leaves a crisp finish. And also “after dark” (or anytime for that matter), you can still order a 24-cup carton of this delicious stuff for about twenty bucks and get it delivered absolutely free.

Add After Dark Decaf to your cart
[hr] 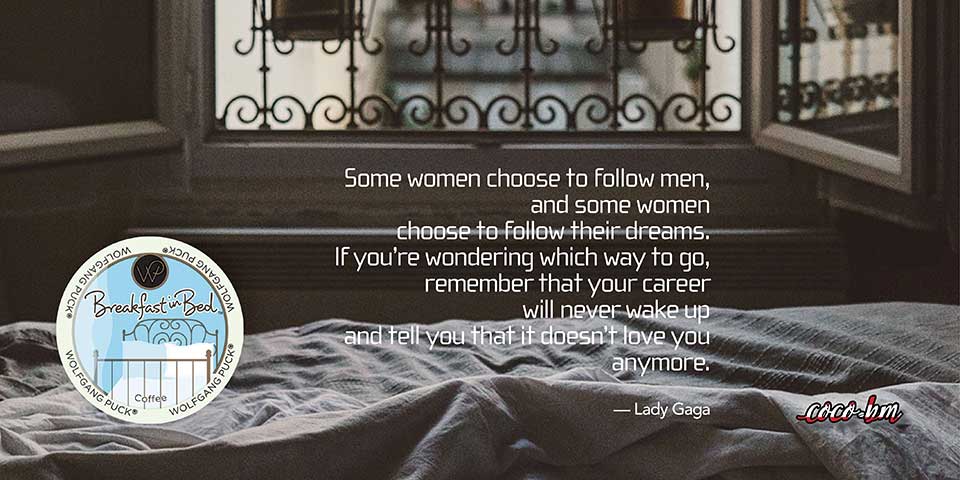 Don’t kid yourself. The reason this medium-roasted, small-estate-grown creation of the charming, world-famous, zillionaire Austrian master chef is called Breakfast in Bed is that this cup of coffee; this steaming hot mug of Joe on your nightstand is as close as you’re gettin’ to what it says on the label. Enjoy!

Add Breakfast in Bed to your cart
[hr] 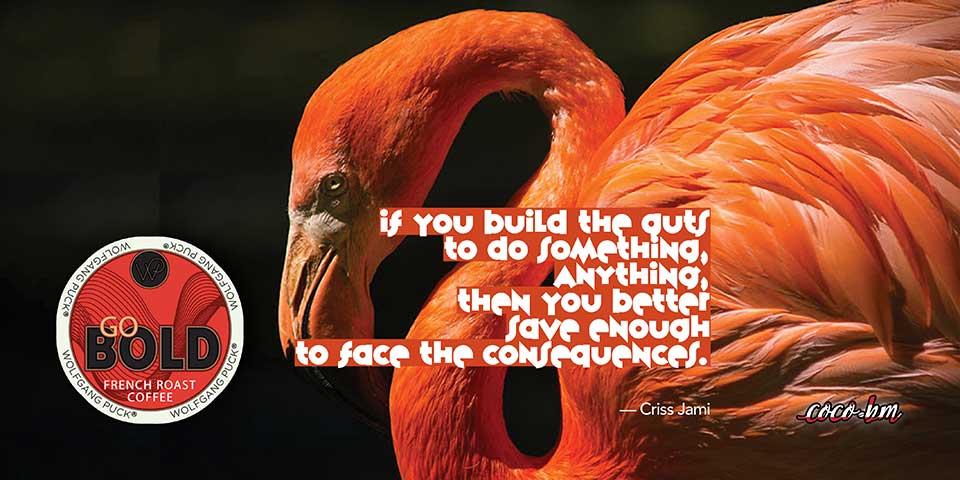 If you build the guts to do something, anything, then you better save enough to face the consequences.
― Criss Jami

All of Chef Puck’s dark roasts are marked bold on his website. This is the only one with the words extra and French in the description and we don’t think he means extra French — and the art for it is red.
All sexy adjectives aside, you really want to have a good reason for staying awake after a cup of this Austrian inspiration. 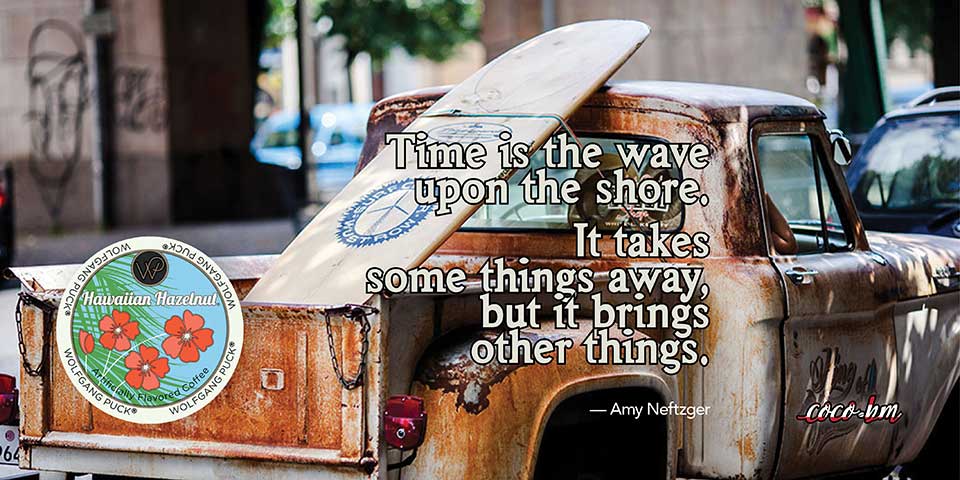 Time is the wave upon the shore. It takes some things away, but it brings other things.
― Amy Neftzger (War of Words)

Hazelnut coffees are Bermuda flavoured-coffee lovers’ flavourite blends. The baristas at Wolfgang Puck Coffee did a great job on this medium-roasted, 100% Arabica recipe so we’re happy that it arrived along with the other exquisite creations by this Austrian chef and and his countryman (who is now our new boss) so actually we like all things Austrian now (except lederhosen.) 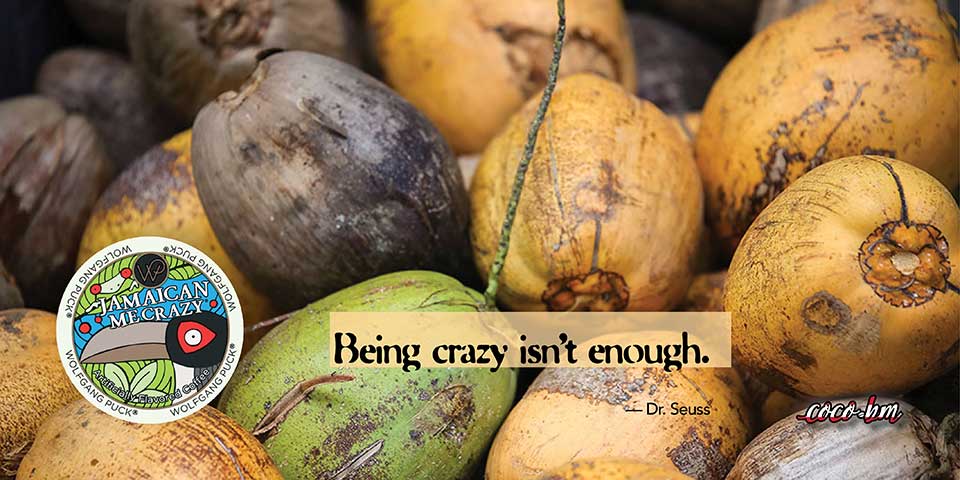 Chef Puck doesn’t roast his flavoured beans lightly as a rule but he did with Jamaican Me Crazy.

And as a rule you don’t often think of Austrians and coconuts at the same time — or do you?

The only thing that even comes close to this great-tasting, fun, coconut-and-vanilla-flavoured, and rich coffee is our seasonal Fair Trade Certified Island Coconut but it’s only available part of the year (usually whenever it’s not snowing in Vermont — so not too often.)

Add Jamaican Me Crazy to your cart
[hr] 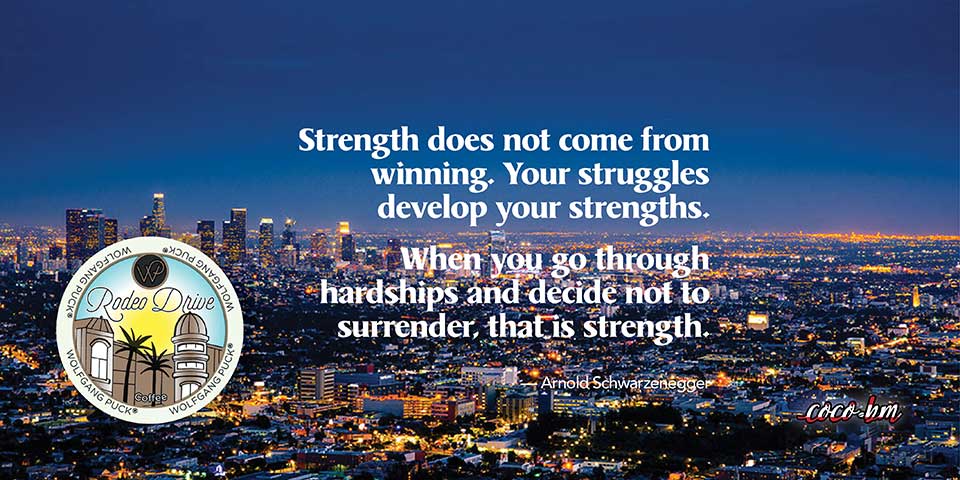 Strength does not come from winning. Your struggles develop your strengths. When you go through hardships and decide not to surrender, that is strength.
— Arnold Schwarzenegger

We found one website that said this blend had “a hint of Southern California.” You have to wonder what the Wolfgang Puck they meant by that. Anyway, this is actually a nice medium roast coffee despite the fact that it’s called a “Traditional American-style cup” and we’re not even charging you extra for the name, but we will if you want it delivered in a Bentley.

BTW all of WP’s coffees are blended from naturally-grown beans from small estates — none of which are anywhere near Rodeo Drive. 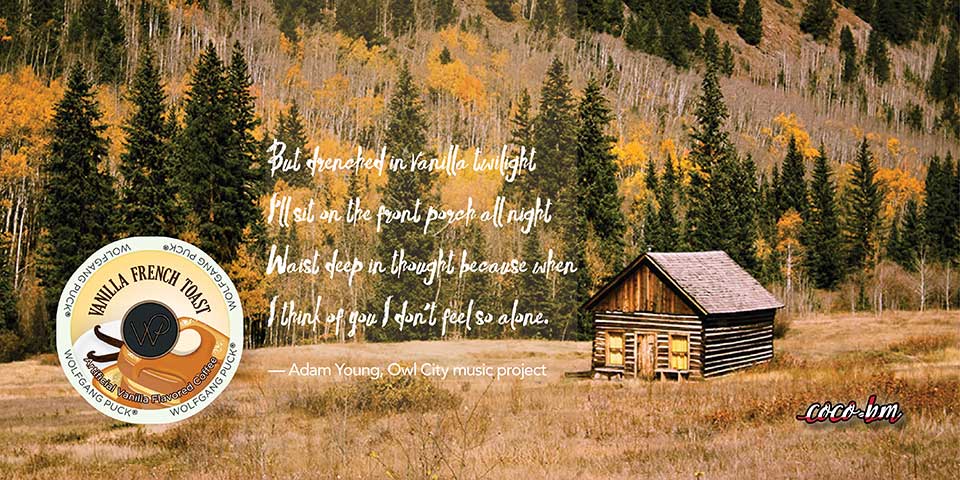 But drenched in vanilla twilight
I’ll sit on the front porch all night
Waist deep in thought because when
I think of you I don’t feel so alone.
— Adam Young (Owl City Music Project)

We have near-perfect weather in Bermuda; pink beaches; cool shorts that almost the whole world thinks are sexy; everyone says “good morning” to each other and now this —Vanilla French Toast— In a cup? Hot? One dish to wash up? No sticky fingers? This IS another world!

Origin, other sources and thanks for this Brew News edition, “The Puck Stops Here”: